Mexicans No Longer Make Up Majority Of Immigrants In U.S. Illegally

For the first time in more than a decade, Mexicans no longer make up the majority of immigrants staying in the U.S. illegally, according to new estimates by the Pew Research Center. 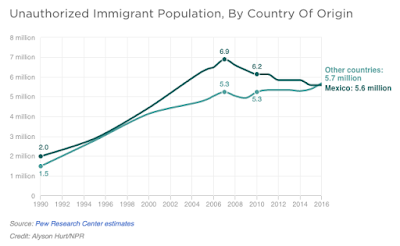 Their analysis of U.S. Census Bureau data shows that last year, there were 5.6 million Mexican nationals living in the U.S. without authorization – half of the unauthorized immigrant population in 2016. Mexicans have been the majority of that population since 2005, according to the Pew report.

Although Mexicans still make up the largest group of unauthorized immigrants, numbers from Mexico have been on the decline since the Great Recession began in late 2007.