Thurgood Marshall Made Them Do It 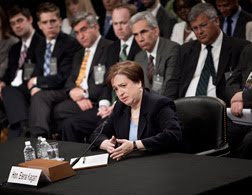 Slate
How Republicans inadvertently made the case for confirming Elena Kagan.
By Dahlia Lithwick
Posted Saturday, July 3, 2010, at 7:07 AM ET

When Senate Republicans decided to turn the first day of Solicitor General Elena Kagan's confirmation hearing into a referendum on her mentor, Justice Thurgood Marshall, they made two big mistakes. The first was tactical: Most Americans just don't know or care that much about Marshall's jurisprudential style. When they think of him, they think of him as a lion of the civil rights movement, a guy you name airports after. While deriding him as a "judicial activist" and "results oriented" may have been an attack on his judicial craftsmanship, to most of us it sounded a lot like an insult to his legacy. But the real mistake the GOP made in tethering Kagan to Marshall was that the comparison emphasized the exact point Senate Democrats were attempting to make all week: that the court has a critical function to play when the other two branches of government let the American people down. Democrats made that point with some success. By invoking Marshall over and over again, Republicans really drove it home.
Picture: Slate.com
Full Story: http://www.slate.com/id/2259498/
Posted by AAAED at 7:37:00 PM