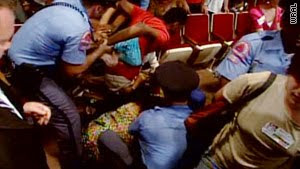 (CNN) -- The arrest of 19 protesters at a rancorous school board meeting Tuesday brings the issue of busing and diversity in education into the national spotlight.
The North Carolina State Conference of the NAACP and local African Methodist Episcopal Zion Churches held a mass mobilization march Tuesday in Raleigh, North Carolina, to protest the recent decision by the Wake County Board of Education to end a 10-year-old socioeconomic diversity plan for public schools. The school board voted 5-4 on March 23 to end "forced busing," a method initiated in the 1970s to promote diversity in public schools.