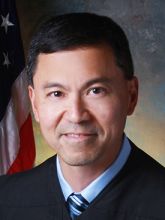 The injunction is against President Trump's revised travel ban, which he issued this month after federal courts blocked his first ban. While many in higher education said the second ban was in some ways better than the first, they still objected to its automatic refusal to allow some people to come to the United States to study or teach because of their country of origin.


The judge's order is likely to be appealed by the Trump administration. As with the first round of litigation, higher education is playing a prominent role in the legal arguments.

The state of Hawaii, in challenging the second ban, specifically cited the impact it would have on the University of Hawaii. Judge Derrick K. Watson based part of his decision -- on the crucial issue of the state's standing -- on the arguments involving the university.

"The university is an arm of the state. The university recruits students, permanent faculty and visiting faculty from the targeted countries. Students or faculty suspended from entry are deterred from studying or teaching at the university, now and in the future, irrevocably damaging their personal and professional lives and harming the educational institutions themselves," the judge's ruling says.
Posted by AAAED at 11:04:00 AM