"The Supreme Court on Tuesday (6-26) ruled in favor of President Donald Trump's travel ban, a major victory in the administration's quest to restrict the flow of immigrants and visitors into the United States.

In 5-4 decision, the justices affirmed the president's vast powers over matter of national security -- even as they grappled with Trump's anti-Muslim statements and the intent behind the controversial policy.

The latest version of the ban levels a range of travel restrictions against five majority-Muslim countries -- Iran, Libya, Somalia, Syria and Yemen -- as well as North Korea and Venezuela. Chad, another majority Muslim nation, was removed from the list in April."

Other articles concerning the court decision:

What does the ban do? 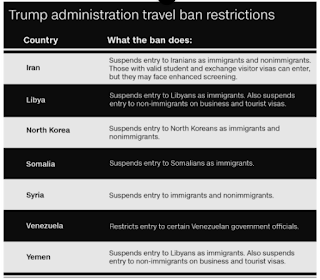