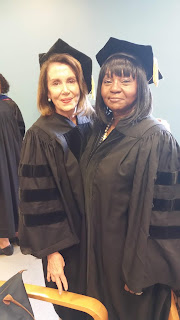 This is what Shirley Wilcher said to the newly minted alumane

Address to the Graduates of Mount Holyoke College, Class of 2018

I believe in you. I salute you. I wish you all the best.
I thank you.
[1] Address at the Youth March for Integrated Schools on 18 April 1959.  https://kinginstitute.stanford.edu/king-papers/documents/address-youth-march-integrated-schools-18-april-1959
Posted by AAAED at 11:25:00 AM